The 13th National Party Congress needs to be well prepared and organised in order to bring the country to a new development period, Party General Secretary and State President Nguyen Phu Trong has said. 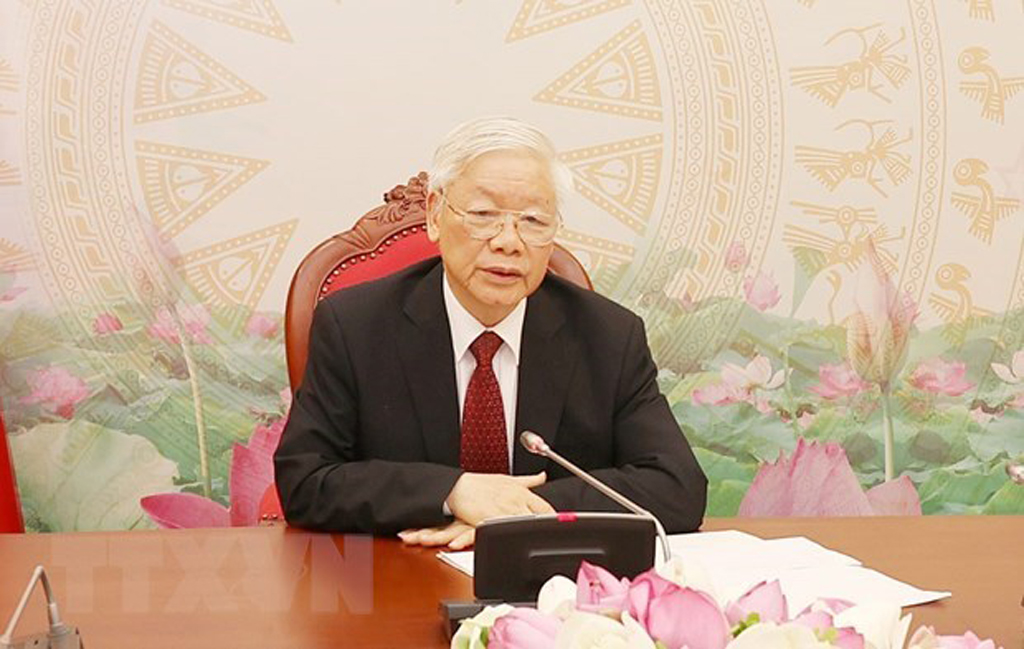 n an article published on August 31, the top leader emphasised the significance of National Party Congresses over the past nine decades, as from the birth of the Communist Party of Vietnam on February 3, 1930.

The 13th National Party Congress takes place in the context of the rapid, complex and unexpected developments of the global and regional situation, and various advantages and opportunities as well as difficulties and challenges being generated for the country.

With the motto of solidarity, democracy, discipline, innovation and development, the Congress will review the implementation of the resolution adopted at the 12th National Party Congress, 35 years of the "Doi moi" (Renewal) cause, the 30-year implementation of the 1991 Platform, and the 10-year realisation of the Platform (revised and supplemented in 2011) and the socio-economic development strategy for the 2011-2020 period.

Draft documents to be submitted to the 13th National Party Congress have been prepared thoroughly and scientifically, with the principle of combining theory and reality, consistence and renovation, and inheritance and development, and on the basis of maximising democracy, acquiring opinions of scientists, officials, Party members, and people, consulting wholehearted and responsible proposals, and promoting brainpower of the entire Party, people and army.

The documents have featured viewpoints, guidelines and major orientations, demonstrating the strategic vision and mindset of the Party, the nation' aspiration for development, and the political resolve of the entire Party, people and army in building and defending the Socialist Republic of Vietnam with rich people, and strong, democratic, equal, and civilised nation. Party congresses at levels the past time had in-depth discussions on all of the documents.

Looking back at the past tenure, the Party General Secretary and State President said the entire Party, people and army have carried forward solidarity, mettle and brainpower, and overcome difficulties and challenges to successfully complete major targets and tasks, and gain significant achievements. They country has continued to develop rapidly and quite comprehensively, with positive changes and many hallmarks.

According to the top leader, despite the global economic and trade downturn, and the severe crisis due to the impact of the COVID-19 pandemic, Vietnam has remained its growth rate of about 6 percent, becoming one of the fastest growing economies in region and the world.

He also spoke of social stability and people's improved living standards, as reflected through the rate of poor households dropping from 58 percent in 1993 to 9.88 percent in 2016 and below 3 percent in 2020.

The building and rectification of the Party and political system has received due attention, and has been carried out in all fronts, from politics to ideology, morality, organisation and personnel work, creating noted hallmarks.

The fight against corruption, wastefulness and other bad deeds has also made progress through drastic measures. Multiple economic and corrupt cases, especially major and serious ones, have been detected, investigated, prosecuted and handled strictly, with no prohibited zones and no exceptions, which have been lauded and supported by officials, Party members and people.

External affairs and international integration have been stepped up extensively and intensively, contributing to consolidating the peaceful and stable environment for development, the top leader said.

Vietnam has resolutely and persistently preserved its independence, sovereignty, sovereign right, unity, territorial integrity and other strategic interests. The country's prestige and position in the international arena has been continuously improved.

Notably, in 2020, Vietnam has basically contained and prevented the spread of the COVID-19 pandemic, gradually restored production and business, and made all-out efforts to complete socio-economic development tasks for 2020 and the 2016-2020 period.

The country has become a bright spot in the fight against the pandemic, and its efforts in this regard have been acknowledged and praised by the international community, contributing to raising public trust in the Party, State and socialism.

There are both objective and subjective reasons behind the achievements Vietnam has recorded over the past five years, with the most important the sound leadership and management of the Party Central Committee, the Politburo, the Secretariat, and all-level Party committees in implementing the resolution adopted at the 12th National Party Congress.

Vietnam now has the best-ever potential, position and prestige in the international arena. The country has emerged to become a nation of nearly 100 million people with the middle-income status. It has set up relations with most of countries in the world, joined almost international organisations, and become a trust-worthy and responsible partner of the international community.

This has proven that Vietnam's development path is sound and suitable with the situation at home as well as the development trend of the era, and that the Party's guidelines are sound and creative.

The sound Party leadership is the leading decisive factor for victories of the Vietnamese revolution, and the Party's Platform continues to serve as the ideological and theoretical flag leading the nation in the reform process, and the foundation for the Party to continue completing its guidelines on national construction and defence in the new period.

The leader warned of the complex, rapid and unexpected regional and international situation, along with the crisis in various spheres, including health care, economy, society and governance administration, caused by COVID-19.

Strategic and economic competitions and trade wars are predicted to get tense, he said.

Besides, the Fourth Industrial Revolution will create breakthroughs across fields, and generate both opportunities and challenges to all countries.

Meanwhile, in Southeast Asia, security and sovereignty disputes in the East Sea are forecast to continue to develop complicatedly, he pointed out.

Regarding difficulties and challenges, he stressed that economic growth has yet to be match potential as after the economy continually expanded at a fast pace in the first four years of the tenure, growth has slowed down strongly in 2020, maybe to a rate of 3 percent. Besides, growth quality remains low and is facing numerous negative impacts of the COVID-19 pandemic.

Besides, the State economic sector, especially State-owned enterprises, still performs poorly while the domestic private sector and the foreign invested one have developed fast but yet in a truly sustainable manner.

Facing those difficulties and shortcomings, the entire Party, people and political system must show high resolve and exert every effort to promote reforms, the leader noted.

He also highlighted the Party, people and army's persistence in and creative application and development of the Marxism-Leninism and late President Ho Chi Minh's ideology; persistence in the goals of national independence and socialism; and persistence in the Party's reform policy so as to develop and safeguard the socialist Vietnam.

In his article, the Party General Secretary and State President noted the overall strategic thought on the country's development for the time ahead, which is fast and sustainable development, socio-economic development being the centre, Party building being the key, developing culture as the society's spiritual foundation, and ensuring defence-security being a crucial and regular task.

The momentum and resources for national development in the new period lie in strongly inspiring patriotism and self-reliance, along with capitalising on the combined strength of the whole political system, culture and people of Vietnam, according to him.

The political report to be submitted to the coming congress will specify targets towards important development milestones of Vietnam: By 2025, Vietnam will become a developing country with modernity-oriented industry and surpass the lower-middle income level. By 2030, when the Party marks its centenary, Vietnam will be a developing nation with modern industry and high income. By 2045, when the country celebrates the 100th founding anniversary, it will become a developed one with high income.

The leader said the overall and detailed targets to be set up at the congress will serve as an extremely important basis for determining orientations, tasks and solutions in national development and safeguarding.

The detailed targets include comprehensively and synchronously perfecting the socialist-oriented market economy; building and fine-tuning regulations and policies to effectively and harmoniously resolve relations among the State, the market and the society; strongly reforming the growth model, restructuring the economy, stepping up industrialisation and modernisation, and improving growth quality, labour productivity and competitiveness of the economy; making breakthroughs in developing modern and synchronous infrastructure so as to provide a foundation for bolstering the development of new sectors and areas, especially digital economy, digital society and digital government; building strong industry; developing mass production agriculture that applies high technology; and strongly developing a service sector based on digital economy and modern scientific-technological advances.

Additionally, it is necessary to guarantee social progress and equality while ensuring the sustainability in population and development policies, and in social policies, particularly those related to social welfare, social security and human security.

In external activities, Vietnam needs to be proactive and active to integrate into the international community in a comprehensive and intensive manner; resolutely and persistently safeguard the country's independence, sovereignty, sovereign rights as well as national unity and integrity; and safeguard the Party, State, people and the socialist regime.

In the article, the top leader also underlined the target of building regular, elite and gradually moderised revolutionary armed forces.

He also emphasised the task of enhancing the building and rectification of the Party, the State and the whole political system so as to have an incorruptible, strong, lean, effective and efficient apparatus; ramping up the protection of the Party's ideological basis; and resolutely and persistently fighting against corruption, wastefulness and negative phenomena by showing stronger resolve and taking more drastic and effective actions.

Concluding his article, Party General Secretary and State President Trong called on the entire Party, people and army to be unanimous and join efforts to ensure good preparations for and organisation of the 13th National Party Congress, thereby leading the country to a new period of development towards "rich people and a strong, democratic, equal and civilised country" and realisation of President Ho Chi Minh and the whole nation's aspirations.