Localities and medical facilities are urgently carrying out multiple measures to prevent the spread of COVID-19 and stamp out outbreaks in the community. 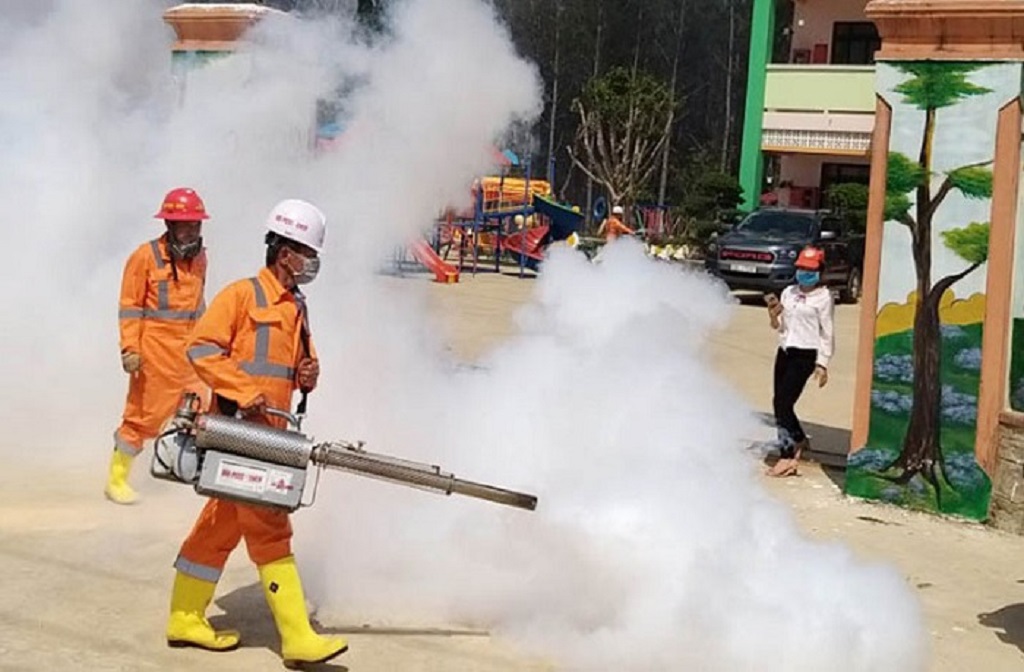 On Monday (Aug. 3), the Ministry of Health requested the provincial and municipal People's Committees to direct local medical examination and treatment facilities to promptly review and actively implement preventive measures to control the disease transmission at health facilities, with social distancing applied in crowded areas, minimising family members caring of the sick, creating a breathable environment in the patients' rooms and taking measures to prevent cross infections for patients at high risk, especially the elderly and people with underlying diseases.

The same day, the Ho Chi Minh City Steering Committee for COVID-19 Prevention and Control held an online meeting, in which Politburo member and Secretary of Ho Chi Minh City Party Committee Nguyen Thien Nhan affirmed that the city was still safe, but also at risk of COVID-19 infection. He asked local functional agencies to strictly control returnees from the central city of Da Nang - the current epicentre of the new COVID-19 outbreaks in Vietnam - from July 1.

Wearing face masks is the top measure to effectively prevent and fight the epidemic, Nhan said, urging for better communications to encourage residents to wear face masks in public places. He also suggested that the city prepare a plan to deal with 50 infected cases at one time so that the local medical sector can be proactive in treatment and isolation.

Regarding Patient No. 620, a resident in Dinh Trang, Lam Ha Ward, Phu Ly City, Ha Nam Province, local authorities temporarily blockaded and isolated a part of the Dinh Trang residential area with about 235 households on August 3 to prevent COVID-19 transmission.

In Dong Nai Province on the same day, local authorities isolated 22 close contacts and related cases of Patient No. 595, while temporarily isolating the Oncology Department at Dong Nai General Hospital, where a doctor who is the husband of the patient works, in addition to applying a blockade on Ho Van Dai Street in Quang Vinh Ward, Bien Hoa City, where the patient lives. Through testing, her 11 close contacts, including her husband and children, have had negative test results once.

On Monday afternoon, Dong Nai Province People's Committee issued a document urging locals of Bien Hoa City - where Patient No. 595 lives - to stay at home and only leave their houses when absolutely necessary. From 0:00 on Tuesday (Aug. 4), the province has temporarily suspended the operation of non-essential services, including beauty facilities, spas, hair salons, video game centres and gyms. For restaurants and food and beverage service establishments, they are allowed to operate but may not serve more than 20 people at a time, while ensuring safe distance among customers for the epidemic prevention and control.

On August 3, the Department of Health of Lam Dong Province announced that the Japanese medical agency has informed it about an infection case of a Japanese nationality (born in 1945) who is the director of a local company in Lac Duong District, Lam Dong. He returned to Japan on the evening of July 31 and was tested by local health authorities and confirmed positive for SARS-CoV-2 later. Lam Dong is urgently inspecting, localising, isolating and monitoring the relevant cases in relation to the Japanese director. Currently, his 34 close contacts have been confirmed as negative for SARS-CoV-2 and are being monitored and isolated according to regulations.

On Monday afternoon, Hanoi City People's Committee Chairman Nguyen Duc Chung said that it is likely that there are local infected persons who have no symptoms yet. Chung said that the capital city can rest assured as all local residents who returned from the epidemic-hit areas to be tested and isolated at home by August 12. Chung also requested the local authorities to encourage Hanoi citizens to be assured of self-isolation and health monitoring at home.

On Tuesday morning, the National Hospital for Tropical Diseases announced that among the 219 Vietnamese citizens who returned from Equatorial Guinea on July 29, only 20 are positive for SARS-CoV-2. Currently, the health of the 20 COVID-19 patients is progressing well. Previously, on July 29, they were flown home on a repatriation flight from Equatorial Guinea. After landing at Noi Bai Airport in Hanoi, all the 219 citizens and the flight crew were placed in isolation at the National Hospital for Tropical Diseases in Hanoi's Dong Anh District.

On August 3, seven enterprises presented testing machines and medical equipment worth a total of over VND2 billion to the General Hospital of Quang Ngai Province to support the hospital in the COVID-19 fight. Vingroup also presented 30 ventilators to Quang Ngai. The provincial Youth Union has received nearly VND200 million from an auction held by orchid lovers to support the local quarantine posts and isolation camps in the province.

On the same day, through the Vietnam Fatherland Front Committee of Da Nang City, the Central Retail Vietnam Group presented Da Nang Hospital with 20,000 medical masks and 300 hand sanitisers. Big C Da Nang (a unit under Central Retail) have increased the number of goods to meet customer needs within two to three months.