Editor-in-Chief of Nhan Dan (People) Newspaper Thuan Huu received US Ambassador to Vietnam Daniel Kritenbrink at the newspaper's headquarters in Hanoi on the afternoon of July 1. 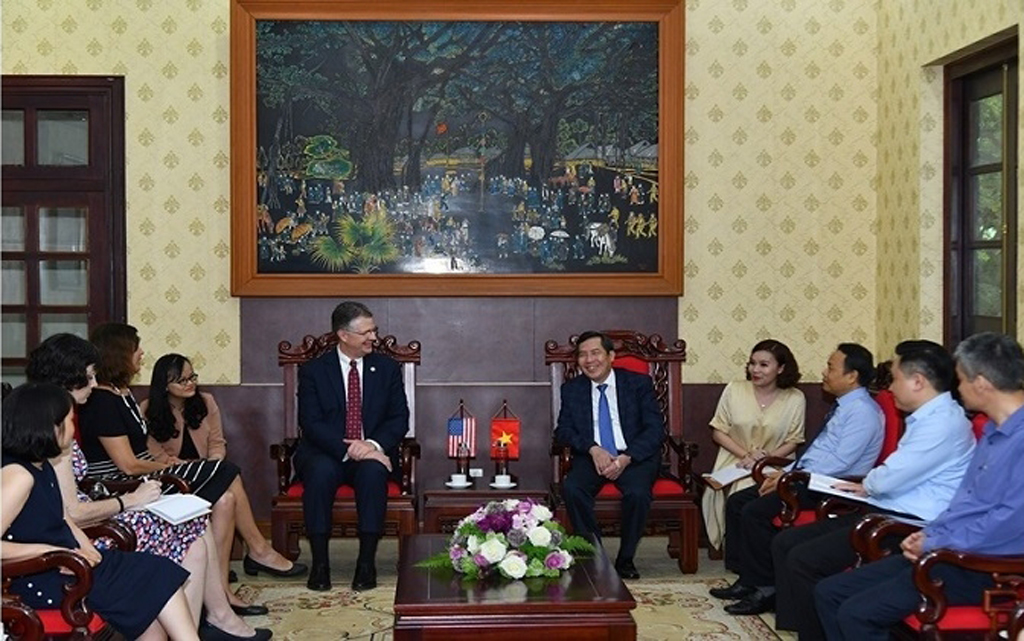 At the meeting, Thuan Huu, who is also a member of the Party Central Committee (PCC), the deputy head of the PCC's Commission for Communications and Education and the chairman of the Vietnam Journalists' Association, and his guest expressed their delight at the fine and substantive progresses in the Vietnam - US comprehensive partnership.

They discussed the prospects of press cooperation between the two countries, including strengthening exchange of working missions and focusing on information sharing, especially in the context that the two countries are organising various activities to celebrate the 25th anniversary of diplomatic ties.

Thuan Huu thanked the US Embassy in Vietnam for its contributions to promoting bilateral relations between the two countries, as well as cooperation in the field of journalism and communications, including helping Nhan Dan Newspaper to obtain valuable documents for the production of the documentary series titled "Vietnam in Ho Chi Minh Era - A Television Chronicle".

The host also expressed his wish that the embassy would continue to cooperate with Nhan Dan Newspaper in promoting the relationship between the two countries in the near future.

Impressed by Vietnam's efforts to prevent and control the COVID-19 pandemic, US Ambassador Daniel Kritenbrink said that he would be ready to share with the US and the world's press about the Vietnam's success story.

The diplomat affirmed his wish to continue cooperating with Nhan Dan Newspaper and other Vietnamese press agencies, thus contributing to enhancing the understanding between the two nations' peoples and further promoting the Vietnam - US relations.